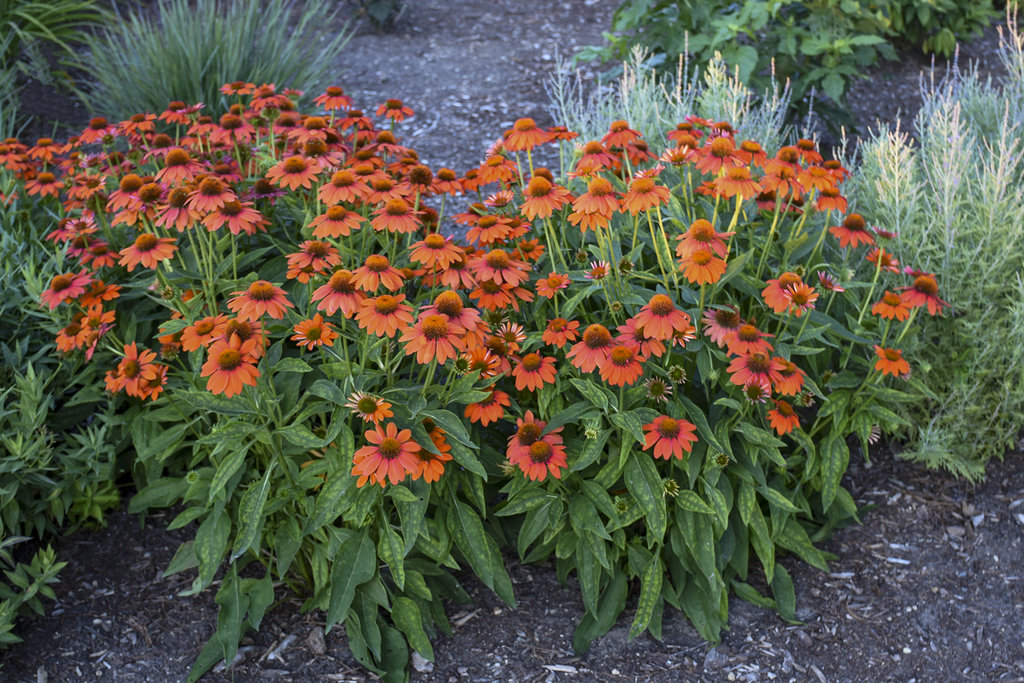 Summer is in full force, and it seems all the griping about rain the past couple years has finally caught up with us.

While woody plants function as the backbone of the landscape, perennials ought to be the workhorses. They offer more abundance in color, texture, and form, while taking up less room than most trees and shrubs. Though there are a lot of summer flowering perennials to choose from, here are my favorites that I think you should incorporate into your gardens. 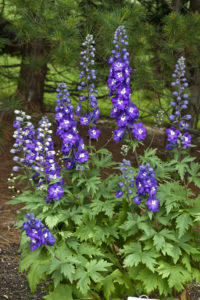 If I had to pick one plant in the entire garden center that fit the label of “aristocrat”, it would be the delphinium. This perennial comes in hues of pink, purple, white, and true blue. In fact, I don’t think any other plant has near the variation of true blue that the delphinium has.

Delphiniums appreciate full sun but don’t care for intense heat. Avoid planting them near cement or in landscape rock as these surfaces reflect heat. They like moist soil but won’t tolerate being overwatered either. Be mindful of mulching around this plant so the site isn’t soggy, especially in winter. While they’re not hard to maintain, they do require you to be mindful of where you plant them.

Plant delphiniums in groupings for impact; as with many perennials with vertical floral structures, standalone plants end up looking wimpy. Delphiniums you see in garden magazines, for example, are always in groupings.

We bring in several series, including plants from the New MilleniumTM and Magic Fountain series, which tend to be smaller than average but have better tolerance for heat and humidity. We also carry the Pacific Giant series, which are larger. If you’re interested in learning more about delphiniums, I recommend gardenia.net, which is one of the best resources for perennials.

What’s a garden without Garden phlox? This native species begins flowering in mid-summer and continues through early fall. The flowers come in hues of pink, coral, purple, and white. One of my favorites is David Phlox (Phlox paniculata ‘David’) which is a beautiful, crisp white that stands at 2-3 feet high.

Garden phlox is known for being prone to powdery mildew, which is unsightly but rarely fatal. The best way to avoid this, however, is to plant them in full sun and avoid wetting the foliage when you water them.

I grow two cultivars of Garden phlox in my garden: Jeanna (P. paniculata ‘Jeanna’) and Glamour Girl (P. paniculata ‘Glamour Girl’). Jeanna has smaller but more numerous flowers than other Garden phlox, resembling butterfly bush or Joe Pye flowers. Glamour Girl has flowers like most, but the saturated coral color is unmatched. Both have shown to be winners in disease resistance, and in the case of Jeanna, with pollinator attractiveness. 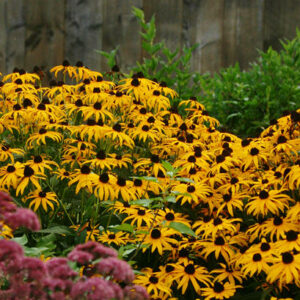 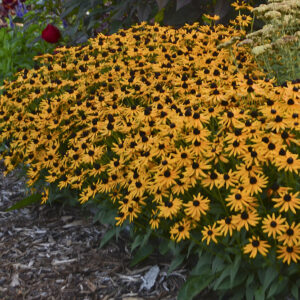 I could do a whole blog post on Black-eyed Susan. Stay tuned, perhaps!

Black-eyed Susan is another perennial that every Pennsylvania garden should incorporate. Popular as an ornamental around the world, this plant is native to the mid-Atlantic and much of the East coast. There are 20 or so species, with many additional cultivars and hybrids. ‘Goldstrum’ is among our most popular selections (Rudbeckia fulgida var. sullivantii ‘Goldstrum’) due to its hardiness and long-flowering time.

My favorite Black-eyed Susan is a cultivar called ‘Autumn Sun’ (R. laciniata ‘Herbstonne’) which averages around 5 or 6 feet tall. I love big perennials because they make dramatic statements in the landscape. Small forms are also available, including ‘Little Gold Star’ (R. fulgida ‘Little Gold Star’) which averages around a foot tall. Most average around 2-3 feet high.

Black-eyed Susan flowers from mid-summer through early fall. Though I consider this to be a summer flowering perennial, it’s the perfect plant to transition the landscape from summer to autumn. Mine have been flowering for a couple months already and are still going.

Bee balm and Wild bergamot are two species of Monarda although both – and their hybrids – are often referred to as just Bee Balm. True to the name, bees love them. I wish more landscapes used Monarda because it’s an important food source for bees and other pollinators. I really like the Proven Winners Pardon series, including Pardon My Cerise and Pardon my Lavender, for its petite size – great for the front of a landscape bed. Larger cultivars are just as utilizable.

Bee balm isn’t the longest flowering perennial, but it flowers in what is often the hottest part of summer – a welcome sight for us and the bees, of course.

The older leaves on Monarda do tend to get powdery mildew in late summer in areas with shade or limited air flow (although some cultivars are more resistant). This is natural so fungicides are unnecessary. I have mine planted alongside other perennials and shrubs so when that happens, it’s not a big deal. Consider it the tradeoff for its high deer resistance, due to the sage-like smell of the foliage. The deer in the neighborhood never bother my bee balm.

Truly one of the greatest landscape plants of all time. Pollinators and birds love them, and we do too. They come in just about every color and size imaginable, with new cultivars from plant breeders introduced ever year. I grow White Swan (Echinacea purpurea ‘White Swan’) in my garden, a white flowering form that grows up to 3 feet tall.

The flowers begin in early to mid-summer and fade in early fall, but I let my flowers go to seed instead of cutting them off. The American gold finches love the seeds in fall and early winter, and the seedheads add structure and texture to the winter landscape.

This is a great plant for attracting butterflies but be sure to opt for plants with simpler blooms (rather than double petaled forms) for maximum efficacy. Double petal forms tend to have less pollen and nectar. Provided they aren’t waterlogged, coneflowers are very easy to grow so are great for the beginner.

This native perennial is underutilized in the landscape, plain and simple. It flowers for 2-3 months, thrives in wet soil, is clay-tolerant, deer-resistant, long-lived, and among the best for attracting pollinator diversity. This is a great native alternative to butterfly bush (Buddleia x).

There are several species grown for ornamental use, plus additional cultivars. Joe Pye is a tall perennial but dwarf forms such as Little Joe (E. dubium ‘Little Joe’) and Baby Joe’ (E. dubium ‘Baby Joe’) average around 3 feet tall. Joe Pye is usually a little slow to wake up in spring but be patient; it will make up for lost time when the weather warms. I recommend pairing Joe Pye with other plants that are fully leafed out or flowering in spring so there’s never a bare spot.

This list would be incomplete without a shade perennial. This adaptable, Astilbe look-alike hosts hundreds of tiny white flowers on tall, ornate stems in summer. Goat’s Beard will grow in part sun to shade in average to damp soil. This is a larger perennial, averaging around 4 feet tall, so this is a great substitute for a shade shrub.

While cultivars are available, including a couple dwarf ones, I grow the straight species in my garden – the form you’d find growing in the wild.

Another forgiving, deer-resistant, and long flowering perennial, Salvia come in hues of purple, pink, and white. I have grown a number, but my new favorite is ‘Azure Snow’ from Proven Winners which is a bicolor form with light purple and white flowers. Salvia begins to flower in spring and finishes in fall, but summer is its glory time. Deadheading tends to promote more vigorous flowering.

Be sure Salvia has full sun and well-drained soil for it to thrive!

Another great addition to the landscape, Yarrow is easy to care for and a boon for butterflies. The lacy foliage is beautiful, and after the flowers are finished, they still provide texture and interest. As yarrow is drought tolerant, this has been a good year for this plant to shine.

I’m often asked if summer is a good time to plant. The answer is yes! Planting in summer only requires you to be more mindful of proper watering. I’m planting in my garden right now if it’s any reassurance to you. Additionally, summer flowering perennials are flowering at the nursery so now is a good time to get an idea of what they look like.

With that said, don’t finish your gardening for the year just yet. Leave some space and stay tuned for my upcoming blog post on fall flowering perennials. Happy planting!