A landscape that doesn’t incorporate spring flowering plants is only extending the winter season. That might be venial if there is great winter interest but in far too many landscapes, it’s an extra 2-3 months of “blegh.” Spring flowering trees are a great place to start but there’s a lot missing if perennials aren’t included. If you’re not sure where to start, let me help.

Below are among my favorite spring flowering perennials for our region. All are easy to grow and maintain. Don’t let their unfamiliarity intimidate you.

A Hellebore cultivar in our display gardens.

Every garden needs to have a few Hellebores! This is the first spring blooming perennial that is widely available in the nursery trade. The flowers come in a variety of pastel colors and open in late March or early April. Even after the blooms are finished, the colorful sepals remain giving it the illusion that it flowers for months. The foliage is attractive making it almost on par with perennials grown for their foliage such as Hosta and Heuchera. Additionally, it’s long-lived, semi-evergreen, deer resistant, and thrives in part sun to shade.

A Hellebore in our display gardens.

Hellebores tend to be a little more expensive than the average perennial as they grow slow and don’t reach flowering age until they are in their fourth or fifth year or so. Plus, there have been a lot of breeding in recent years for colorful new cultivars. You’ll often see a couple basic types in the box stores, but we carry a lot more variety.

Hellebores do best in part-sun to part-shade in moist to dry soil which makes them very versatile. While it looks best in groups, it still can hold its own as a standalone plant. This perennial deserves a spot in every landscape. Next time you’re in, check out the Hellebores in our display gardens too.

A fun tidbit for those with an affinity for science. Some use the common name “Christmas rose” and “Lenten rose” interchangeably with Hellebore but they actually refer to just two species of Hellebore, Helleborus nigra and Helleborus orientalis, respectively. For a fun read on the species and hybrids of Hellebore, you can go here: The Different Varieties of Hellebore | Gardener’s Path

This is early to mid-spring blooming perennial is an underutilized gem. Growing 6 to 8” tall, it works best at the front of a garden bed where it will be noticed. The lacy foliage emerges in March and the blooms unfurl in April. The bell-shaped, anemone-like flowers come in purple and burgundy and the seedheads are reminiscent of clematis seedheads, which add additional interest and beauty.

Although it appreciates sun, Pasque flowers dislike heat so it’s better suited in a bed bordering the lawn as opposed to the driveway. Light shade may be beneficial for this reason. This perennial often goes dormant in summer so plant these with other perennials that are in flower in summer and fall so the space isn’t bare.

The genus Viola hosts many species, including pansies and Johnny jump-ups. In fact, there are nearly 20 native species to Allegheny County and western Pennsylvania. Most violas sold at nurseries are treated as annuals, but some will survive the winter as they are remarkably cold hardy (who said pansies are associated with being weak, again?). We carry both annual and perennial violas.

Perennial violas usually bloom in April, a welcome reprieve of color amidst the many cloudy days we tend to have in spring. They’re also an important nectar and pollen source for pollinators. In fact, some Fritillary butterflies are totally reliant on violas to complete their life cycles. Most viola species dislike heat so it’s best to plant them in part sun. Like Pasque flowers, plant them in groupings and site them in the front of a bed or as a container plant where they are visible.

Columbines are easy to recognize because of their unique flower structure. Many cultivars host white petals with a variation of color in the sepals (leaflike structures surrounding the petals). The petals have long spurs or projections that extend behind the plant that offer nectar to pollinators, including hummingbirds. The Eastern columbine (Aquilegia canadensis), native to Pennsylvania, has yellow limbed, red flowers.

Columbines appreciate the “Goldilocks zone.” Where too hot and dry, the foliage becomes ragged and where too wet, the plants rot. But given a moist yet well-drained site in part sun, they will flourish. Some columbines are shorter lived but because many forms self-seed, they’ll often form little groupings. This is another petite plant, around 18” tall, for the front of a bed. Additionally, Columbine is uninteresting to deer and rabbits, another perk for those with neighboring herbivores. 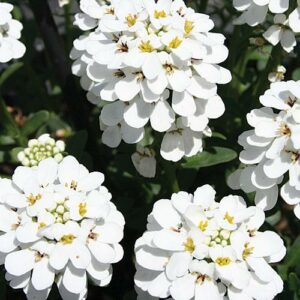 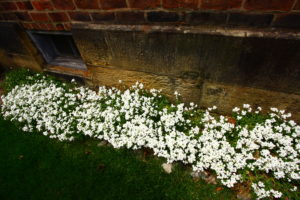 I don’t see this perennial often but have long been familiar with it as my mom had a couple planted along the driveway when I was young. This is another underutilized plant that requires little care.

Candytuft hosts numerous tiny white blooms in April which look like sweet alyssum, one of my favorite annuals. The foliage is semi-evergreen depending on how mild the winter is and shows great deer resistance. This perennial likes drier soils and exhibits a lot of heat and salt tolerance making it an excellent plant for along walkways and driveways. It hates soggy soils so make sure the area is well-drained. This is a great flowering alternative to a groundcover Juniper.

Creeping phlox is a popular, flowering groundcover which forms a carpet of pink, purple, or white blooms in April to May which stand out in the landscape, even from a distance. It’s also semi-evergreen and more resistant to powdery mildew than other Phlox species. This is another great flowering alternative to groundcover Juniper. Like junipers and candytuft, they hate soggy soil so plant accordingly. I have mine planted on sloped areas where they do thrive, but they also look great along walkways and in garden beds. 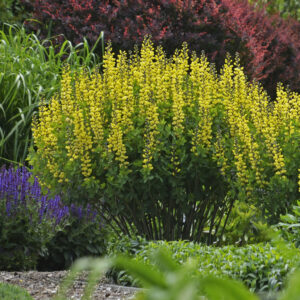 This genus of plants is usually referred to as False Indigo although that name specifically refers to the species Baptisia australis. Two other species are also popular, and many cultivars are hybrids. I often refer to all of these by their Latin name, Bapitisia.

This native perennial blooms at the end of spring, a great transitionary plant that prepares one for the summer garden. The flowers resemble lupines, as they are related (both in the pea family). While lupines are often known for being a little fickle in the garden, Baptisia is the opposite. This plant is drought tolerant, tolerant to periodic flooding, highly deer-resistant, and long-lived.

While the blooms are short-lived, they make a dramatic impact when they do bloom. Baptisia come in purples, whites, yellows, and pinks, along with bicolored forms. Baptisia has a shrubby habit so can function as a shrub or a large perennial in landscape design when it’s finished flowering. This is another gem that should be utilized more. 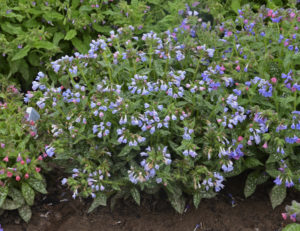 The above listed are my favorites for spring flower and interest. That’s not to say there aren’t other fantastic ones! Three more come to mind, and probably ones you’re familiar with.

Like Hosta and Heuchera, Lungwort is both a foliage plant and flowering plant. Small attractive blue, purple, or pink flowers bloom from March to May depending on the cultivated variety and the season. Foliage is green and speckled with light green to grey patches throughout the leaves. This plant is shade happy and deer resistant! Don’t let the name gross you out – “wort” is Latin for plant!

Who doesn’t admire the flowers of a bleeding heart? This shrubby perennial swiftly grows to 3 feet high and wide or so, and flowers in between April and May. Bleeding hearts dislike heat, and as an ephemeral plant, usually go dormant by mid-summer. Don’t let the dainty appearance fool you, this plant is a tough one. Pair old-fashioned bleeding hearts with other plants in the garden so the area won’t be bare when it resumes dormancy. 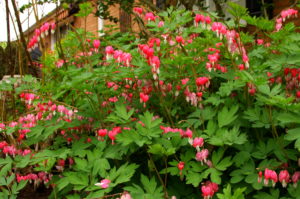 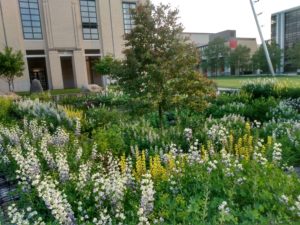 Baptisia planted in a rain garden at Carnegie Mellon University.

I hope you’re excited for spring flowers! While these are some of my favorites, there are also many other choices. A well-rounded landscape utilizes spring color and form, so I invite you to come visit us before summer to see what’s in stock. As I’ve mention in my other posts, with the slower pace COVID-19 has exerted on society, now is a good time to all of us to think about connecting with the Earth a little more. Hope to see you soon!